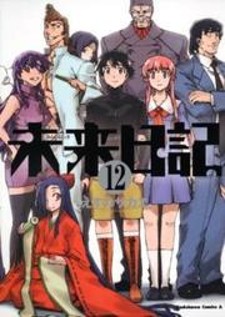 Second year middle school & 14 year old, Amano Yukiteru, is a boy who has a problem with making friends. He keeps a diary on his cell phone of the things he witnesses, believing himself to be a bystander to the world's happenings. Yuki's only salvation from solitude are his imaginary friends, one of whom turns out to be the not so imaginary Deus Ex Machina, an apparent lord of time and space. Deus tells Yukiteru he's planning a 'fun game' and upgrades his cell phone to a new model which predicts the future. Yuki is quick to abuse his new power but is brought back to earth when the diary predicts his own death. After managing to fend off his would be murderer, Yuki discovers Deus's game involves himself and eleven others with precognative diaries to fight to the death for an incredible prize going to the last man standing. Outgunned and desperate to survive, Yuki teams up with Gasai Yuno, his psychotic stalker who'd do anything from killing to dying for him. A spectacular story full of twists and double crosses ensues as the twelve diary holders scramble to find each others' identities while keeping themselves alive.
Read manga in spanish
Chapters
Top genres
romance 1591comedy 1438shounen 1097shoujo 1095action 1089school life 943drama 940seinen 784fantasy 781supernatural 752adventure 485slice of life 471sci-fi 341mystery 336historical 250horror 211josei 182psychological 173sports 143tragedy 138