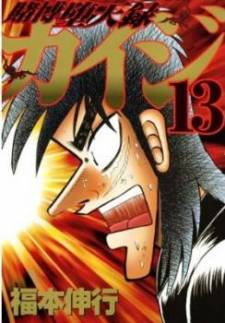 The overwhelming victory against the 'Bog' has been like a dream. Itou Kaiji, now free of debt but without a penny is leeching himself in Mr.Sakazaki's new house, despite all the flirtings (extreme torment for Kaiji) from Sakazaki's daughter, Mikoko. Sakazaki attempts to kick Kaiji out, even by offering a farewell 'we never knew each other' money of 3 000 000 yen. While Kaiji ponders himself on the decision, he is visited by Miyoshi and Maeda, two of his 'allies' he had saved from the last part of the series. The Kaiji series is divided into four parts: 1. Tobaku Mokushiroku Kaiji 2. Tobaku Hakairoku Kaiji 3. Tobaku Datenroku Kaiji 4. Tobaku Mokushiroku Kaiji: Kazuya-hen