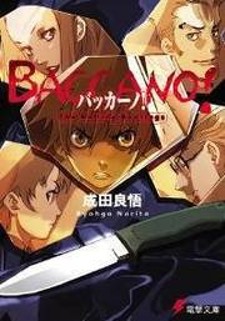 Aboard the Advenna Avis in 1711, a group of alchemists summon a demon in the hopes of gaining eternal life. The demon gives them an elixir of immortality and the method of ending their existence by "devouring" one another. Soon after, one among them begins to devour his companions. Realizing the danger posed by staying together, they scatter across the globe. Centuries later in 1930's America, a certain federal investigator tries his best to combat the rise of organized crime during Prohibition, send a particularly infuriating terrorist to Alcatraz, and catch an outrageous thief duo. Meanwhile, the transcontinental train, the Flying Pussyfoot, begins its trail of blood across the country. In 2002, a small group of the original Advenna Avis alchemists are on a journey to find the rest of their fellow immortals. However, there is one companion they did not expect to meet again. Seemingly unrelated events, from a sleepy Italian city in the early 1700's to a modern luxury cruise ship traveling across the Pacific, reveal themselves to be far more connected than anyone could imagine.
Read manga in french
Chapters
Top genres
romance 1591comedy 1438shounen 1097shoujo 1095action 1089school life 943drama 940seinen 784fantasy 781supernatural 752adventure 485slice of life 471sci-fi 341mystery 336historical 250horror 211josei 182psychological 173sports 143tragedy 138