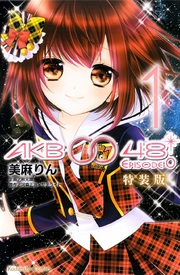 AKB48 is a Japanese idolgroup that has sold millions of albums. Its world famous and every girl dreams of being a member. Hoshina Furea is a shy girl. She has a childhood friend who has a good chance too be an AKB48 member. Her name is Noa. In the school there is an idolgroup named AKB0048. Its a very popular idol group. Only the pretty and talented come to the group. The problem for Hoshina Furea is that she and Noa have the same dream. They want to be in the AKB0048 and get even higher....... What will happen to their friendship? From Phoenix Serenade Scans and Bikkys: In the year 0041, AKB48 had changed their name to 'AKB0048' To protect the affinity of the first generation, they decided to chose a successor. A total screw up research student of AKB Academy, Hoshino Furea, had auditioned but completely failed. And yet why does Hoshino Furea become the successor of the legendary center of 'Maeda Atsuko'?
Chapters
Top genres
romance 1591comedy 1438shounen 1097shoujo 1095action 1089school life 943drama 940seinen 784fantasy 781supernatural 752adventure 485slice of life 471sci-fi 341mystery 336historical 250horror 211josei 182psychological 173sports 143tragedy 138